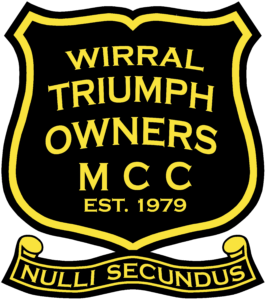 Jackie and I got together in 2004 and she started coming to the Triumph Owners club meetings with me. She went to her first Dragon rally with our club in 2005 and swore it would be her last! However, she soon got to enjoy going to rallies and touring on the Bonnie.

We went all over the place by bike – holidays to the Isle of Man, Northern Ireland to watch the racing, touring round Britain, and many events with Wirral TOMCC. Trifest in Guernsey and Somerset. We became regulars at the Dragon, the Offas Dyke (her favourite) the Historic Bike camp (my favourite!) and the Farmyard party.

We rode in all weathers but Jackie drew the line at going to the Elefantentreffen and Krystall rally where temperatures can drop to -25! I fitted a sidecar to the Bonnie in 2007 and Jackie was equally at home in the sidecar as the pillion.

In October 2016 a car pulled out on us causing serious injuries.  She broke three bones in her leg and was unable to walk again.  She suffered a great deal of pain, particularly after her leg became infected following an operation.  But, being Jackie, she continued to fight on.  She had previously been successfully treated for breast cancer so this wasn’t going to beat her.

If life was always fair and rewarded good, brave people, then Jackie’s life would have continued to steadily improve but in September 2017 she received the devastating news that her cancer had returned and was terminal this time.

Jackie didn’t want to know how much time she had left to live her life but she did want to live it the best way she could, enjoying every moment making memories with her lovely family and friends.

The Offas Dyke rally in July 2018 was the last Triumph Owners event Jackie was able to get to and the following week she was admitted to Clatterbridge, where she passed away on 4th August.

The Cancer Centre staff were very kind to Jackie, her family and me during those last few weeks, allowing the family to live at the centre and making us as comfortable as possible in the circumstances.

Some of the great adventures of Jackie & Dave

By choosing to support our charity, you will help us to transform cancer care for people right here in our area. Last year, work began on building Liverpool’s first cancer hospital in the heart of the city, backed by our £15m appeal, which will also ensure significant investment in our Wirral site.

You can be part of this incredible journey, by joining us and raising cash for this once-in-a-generation opportunity!